Sock of Ages The Wonderful World of Sock Monkeys! 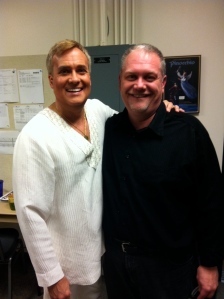 With the amazing Bill Burden, opening night of Seattle Opera's "Orpheus and Eurydice"

My job at the opera is so much easier and lots more fun when a favorite singer is part of the production, and at the top of my favorites list is tenor Bill Burden. Bill has one of those voices that is incredibly expressive and beautiful, and so recognizable it’s in a class of its own – “The 3 a.m. Voice” – if you woke up at 3 o’clock in the morning and heard his voice on the radio, you’d know instantly who it is. I first worked with him on the 2006 production of The Italian Girl in Algiers, with the amazing mezzo soprano, Stephanie Blythe – talk about operatic musical heaven! – and this production of Gluck’s Orpheus and Eurydice (with the gorgeous soprano, Davinia Rodriguez) would be our 6th show working together. Bill is so easy to work with, treats everyone like a million bucks and he has the distinction of owning two of my opera sock monkeys: Dodge, from Amelia, and Edgardo from Lucia di Lamermoor. For several weeks I’d been wondering what to do as a momento of the show for him, figuring a 3rd sock monkey would take it from cool to lame/overkill real fast. I mean how many sock monkeys does an opera star really need, even if I did make them?

Barbie doll's "Gay Parisienne", stock #964 in original packaging. This is one of the rarest of all Barbie costumes as it was only made in 1959, the year Barbie was introduced.

You probably remember from reading my bio (you have read it, haven’t you?), that I have a background in collecting vintage Barbie doll stuff and used to write for magazines about it. One of the things that still floats my boat about vintage Barbie, are the amazing clothing ensembles from the 1960s still in their original packaging. Mattel was on the cutting edge of marketing toys to kids in the ’50s and ’60s, and when you look at the way this stuff was packaged, no wonder kids had to have it! I remember walking down the Barbie aisle of the Giant T Drugstore or Valu-Mart and being overwhelmed by the dazzling display of Barbie clothes in those striped boxes hanging from the wall and how they were just waiting to be ripped open! It got me thinking, why not just give Bill a “fashion” for one of his existing monkeys? His costume as Orpheus was really basic – white jeans and a white tunic – so the magic of what I wanted to do was going to be in the accessories. Anyone who collects vintage dolls or action figures knows that assembling the accessories to an outfit is the fun/frustrating part and what can really make the cost skyrocket. Focusing on the accessories also let me get crafty, which I love too. I decided Orpheus would need his tunic (he had white pants for “Dodge”), medallion, lyre, golden apple and blindfold. And, I wanted the tunic, medallion and blindfold to be correctly scaled so the monkey could actually wear them if they ever came out of the package – yeah, I know, a bit too obsessive, but look at the stuff I make!

The most fun I had with this was putting it all together. I used blue poster board so the items would stand out more, and blue was used as a predominant costume color in the show. I made a header card with some information about the “product”, and added the stock #0312 – March 2012 – to commemorate the production date, and as an homage to the old doll packaging. The finished piece measures about 11″ x 16″ and is complete with a hole in the header card to hang it for “sale” at the store. I gave it to Bill on closing night of the show and it was nearly as a big a hit as he was. And yes, working on this project made me start hunting for those NRFB (Never Removed From Box) vintage Barbie doll clothes I never had when I was a kid. If only I’d had a checking account when I was five years old….. 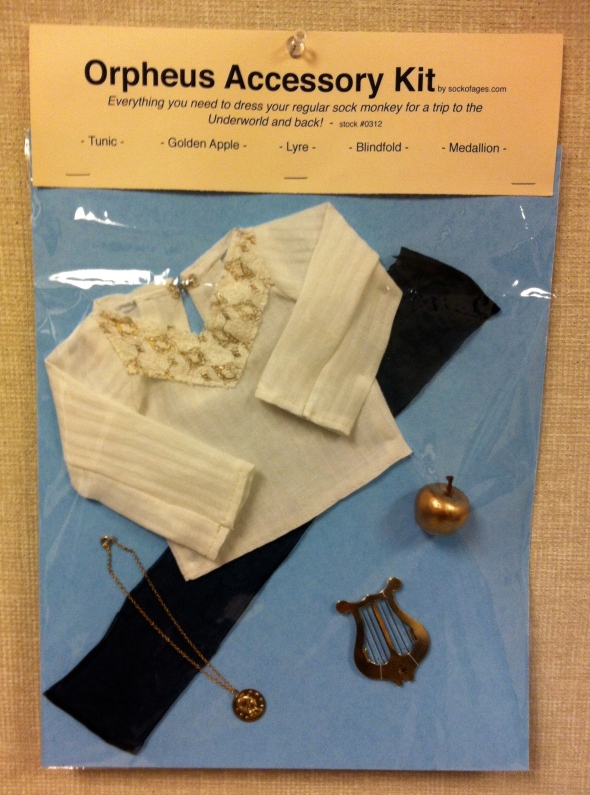 Verboten – the sock monkey that dare not show her face

Have you ever had a situation where you do/say/create something with a certain intent (or no intent), then somebody else comes along and puts their own spin on it and completely changes your original idea into something you never intended or never actually even imagined somebody would think of when you originated that thought or idea? Such is the case with VERBOTEN – the sock monkey that dare not show her face.

The "Love-Cursed Bride" with her sock monkey

During a production of Lucia di Lamermoor at Seattle Opera last season, it was our good fortune to have among the supernumaries Miss Rosetta Greek. Rosetta is one of the coolest, most creative people I know – she is the kick-ass proprietress of Heavens To Betsie, and a very talented actress. She also inspired me to start my own sock monkeys after she created the beautiful Mermonkey, Atlantis, a few years ago. So it wasn’t difficult to decide I wanted to make a sock monkey for Rosetta based on her character, The Love-Cursed Bride, in the opera.

I wanted to do something different for this monkey – a different look and I wanted it to be special for Rosetta. I found a pair of gray, vintage socks I thought would be perfect for a ghost, I had some lovely silk for the wedding gown and matching gloves (trimmed with real vintage mother-of-pearl buttons from Aunt Fofo’s button box), I made her a real boned corset, some lace-trimmed bloomers and I hand beaded the veil similar to what was on her original costume. She is beautiful! But that’s not quite the end of the story.

As you’ve seen from my other posts, I had a show at McCaw Hall during the opera’s production of Porgy and Bess over the summer. I submitted photos of my work and I got the green light that I was chosen to exhibit. Then the problems began. When you assemble a sock monkey, the heel becomes the head, face and mouth of it. My ghostly gray sock had a black heel, so the monkey had a black head, face and mouth. I received an email a couple weeks before the show that the Ghost Bride would not be allowed in the show because it would “potentially offend patrons.” Huh? This was followed by another email a few days later telling me I could not refer to my work as “sock monkeys” because the term “monkey” was used to negatively refer to African Americans. Wow. And this is 2011?

I found it rather difficult to believe that anyone was going to look at my work and read it as offensive (so not what this project/endeavor has ever been about), but I offered to call them “sock puppets” (even thought they’re not) and be done with it. I did find it interesting that the Seattle Opera’s blog showed photos of the Ghost Bride and referred to my work as sock monkeys, but then I wasn’t in charge of that, was I?

Anyway, the show got a lot of positive feedback, Rosetta was thrilled with her monkey, my friend Rozarii did an amazing photo of her, and I think she’s still my favorite. After all the “trouble” she caused, Rosetta decided to name her Verboten, which I think is absolutely perfect. And just in case you’re wondering, they were called sock monkeys when they were invented 70+ years ago and they have tails like real monkeys do. What do you think?